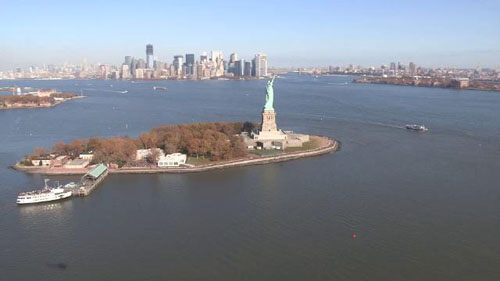 Can you shoot video from a helicopter handheld or do you need a gyroscope?

We recently did aerial videography and photography over New York for a client who was laying cable in the Hudson River. After shooting video on the ship, we were picked up by the helicopter from the cable ship’s helipad. We then circled the ship a few times. Before we were done, we took a trip down to the Statue of Liberty and got some aerial video of Manhattan.

This 44 second video shows a sample of what we got — both before and after post production image stabilization.:

The client didn’t want the significant expense of hiring a helicopter that came rigged with gyroscope. Since they wanted only wide shots of the ship with Manhattan background, we agreed that it was possible. We used a Canon xf305 with dynamic image stabilization in the lens. Still, the wind and motion of the helicopter caused some unwanted camera moves. This was fixed up a bit in post production.

We used FinalCut Motion software’s Stabilize filter to smooth out some of the unwanted helicopter bumps, tilts, and shake.

Tips for preparing to shoot aerial video from a helicopter
The helicopter removed the door. We used straps and carabiners to attach the camera to the operator since, in the sad case that the operator dropped the camera we needed to prevent it from being sucked up into the blades and causing damage up there. We used tape to make sure that the operator’s seat belt wouldn’t accidentally release.