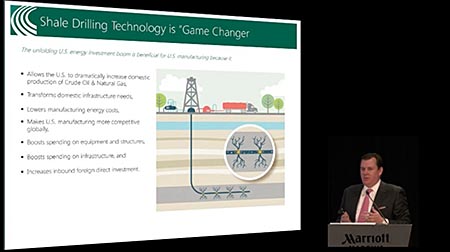 We were asked to provide live streaming service from Times Square in New York City, and this is how we did it.

On November 6th, 2013, we live streamed the conference “Insight and Enlightenment into the World of Closed-End Funds”, the annual Closed-End Fund Event for Pristine Advisers and CEFNetwork, from Times Square in NYC.

Here’s what Patricia Baronowski, president at Pristine Advisors, said after the event:

“You have been an absolute pleasure to deal with and we look forward to working with you again.”

For those who don’t know, live streaming is when you broadcast video onto the web live so that viewers who are not geographically present, can still watch the event. We alternated between three shots: The speaker in full, the powerpoint in full, and the both of them together in a big/little configuration.

You can see an example of the big little at about 30 seconds into this example live stream:

Some technical details: We used a Wirecast switch between the speakers and the powerpoint. An iMac was able to run the software and compress the video into a stream that was suitable for download. We used Ustream as a content distribution partner and we fed them a stream at 800kb/s.

One of the requirements was that the client wanted each speaker to exist as an independent video after the event. So we “stopped down” on the local record within Wirecast between the speakers so we ended up with individual files locally that we could then upload to our servers without the need for editing. We did record an HD version of the speakers within the camera to help with any post production fixes.

To fix the videos in post, we converted the .mp4 to prores using Streamclip, made the edits in finalcut, exported a full res quicktime movie and then compressed to quicktime 7. We had to change the extension from .mov to .m4v so that the videos would play correctly for users who were using Microsoft Internet Explorer — otherwise those users only heard the audio but did not see the video.

We help companies live stream video in New York all the time and we strive to stream more and better video for less costs. If you would like to hear more, please contact eric@wprny.com directly for a quote