These are the three basic levels of service you can get from a webcasting service provider. Each has it’s benefits and weaknesses.

1. Single Camera Stream – Sometimes you just want to broadcast something live. You can do it from a cell phone these days. Even a simple web camera or flip camera to do that and broadcast on a free streaming service. This approach is perfect for a small non-profit, public service, school, or church. We can broadcast with a simple camera, a computer, and an internet connection.

Some content is important enough that it doesn’t really need extra production elements. Sometimes the viewer is more than willing to watch a raw single camera feed. In 2009, WPRNY broadcasts short live events like this for as little as $1450. Of course, you can do it for free if you have a camera and a (preferably wired) internet connection (with at least 500kb/s upload speeds), and the gumption to get it done. 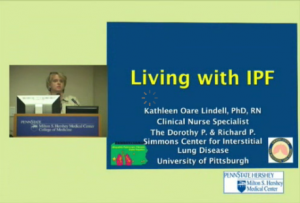 2. Wirecast Stream – The next step up would be to use a switching and compressing software like Wirecast, which allows for a more broadcast look — things that you might expect from a real TV show. Things like: More than one camera, graphic overlay, incoming skype feeds, switching between cameras, big/little picture in picture, cross fades, and integration with pre-produced live clips. For business needs, a setup like this can allow a camera on the podium to be switched with incoming presentation slides, animated logo intros with music, and graphical overlays to give the broadcast a compelling professional presentation.

Use a beefy mac tower and wired internet connections to maximize this technology. That’s part of what you pay for at WPRNY, a new york video production firm that broadcast short events in this way starting at around $5K in 2009. “As a Wirecast system is overburdened it will drop frames,” says Eric Wolfram, director of production at WPRNY, “This might make it impossible to save a full resolution copy of the switched master while simultaneously compressing and broadcasting the live event over the web — especially as you add different cameras and effects.” So going this way forces the choice: Do I want a better quality (higher frame rate) broadcasting, or do I want a full resolution copy of the switched live event? If you want it all, read on. 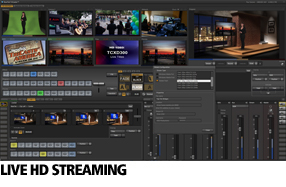 3. Tricaster Stream – The Cadillac of live streaming, a Tricaster is a hardware appliance that enables full studio production at events. You can bring in various mix source resolutions and aspect ratio cameras, skype feeds, raw footage and easily print an HD version of the switched event to the internal hard drives while simultaneously compressing and broadcasting various live feeds. This allows for Extensive audio input/output flexibility and even the use of green screens to place people or products in virtual sets.

If you’re going this route, you probably want to budget for things like equipment rental, pre-production design, scripting, event rundown, graphics and motion graphics as well at the experienced staff to implement the plans. A half day event with these sorts of services would generally start at $16K.

But no matter what your event or budget is, there is a live webcast broadcasting approach that is perfect for you and your organization. Good luck.