Oxygen Ads approached us to handle the live streaming broadcast from Roosevelt Hospital in NYC. The topic was Thyroid Nodules: Assessment and Management from Dr. Catherine Sinclair. Here’s how we handled it.

We opted for a single camera at HD going into an imac running Wirecast. We put Desktop presenter on Dr. Sinclair’s laptop and then created a big/little in wirecast. 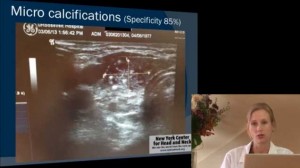 We chose Ustream Pro as our content distribution network over LiveStream because they don’t require login to view and because the number of viewers that we expected wouldn’t have made Ustream’s bandwidth extra pricing kick in.

Some of the particular spec we used to stream live from NYC:

Hera are some words of advice to people who attempt to do the same thing:

If you would like to stream video live from NYC area using a simple Wirecast setup, we would love to help you with an estimate for your costs.