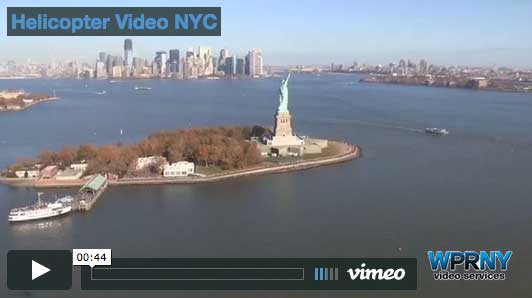 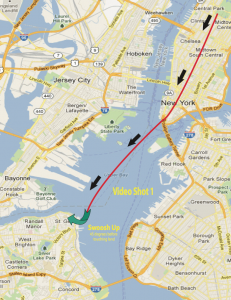 When people say they want helicopter footage over manhattan, they’re often thinking about something like you’d see in a Batman movie, where your point of view is flying towards the city, right down the avenues and to a particular building and then to the window. This requires a gyroscope mount on the front of the helicopter. It can’t really be done shooting out a window or door with the helicopter flying sideways.

Specifically, flying over Manhattan like this requires a Cineflex mount that costs $600K to buy and about $4500 to rent. Most pilots will want a twin engine helicopter for this sort of shooting, which costs $1750 or so per hour to rent plus a fee for the pilot and landing. Then there is the fee for the cinematographer and you might even want somebody onboard to direct. You can see the costs adding up.

We once were hired to shoot video out of the door of a helicopter. This was a single engine helicopter flying over the river and pretty much constantly moving. If you want to hover, most pilots wouldn’t want to do that over the city in a single engine craft because it can cause some down draft problems that a single engine isn’t powerful enough to deal with. But the point is, you can shoot out the door of a craft, just be careful not to fall out.